No matter how beautiful the actors or riveting the plot, sometimes it’s the furniture and set designs that are the real showstoppers in films. “American Psycho” was released over 20 years ago now, and yet it is still regarded as a benchmark for 80s apartment chic.

Designing the home of Patrick Bateman fell to set designer Jeanne Develle and production designer Gideon Ponte, who used a mixture of tones and carefully selected art and furniture to create an environment fit for an ego-centric psychopath. Having said this, the sleek minimalist look of Bateman’s apartment continues to inspire interior designers, collectors, and hipsters nearly two decades later, without the lunatic association of course. 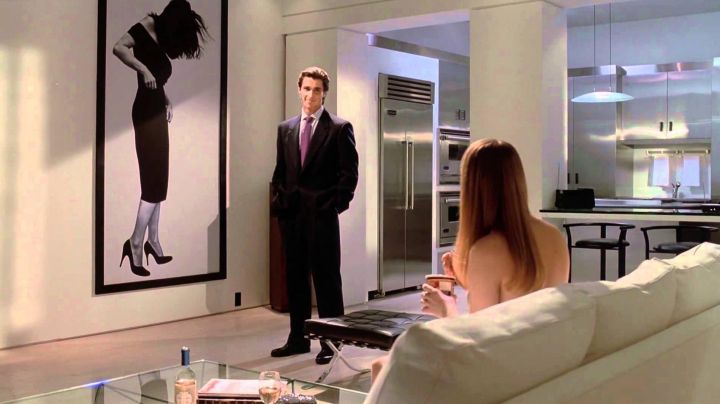 The carefully planned apartment is filled with designer furniture from all over the world. We see a chair from Charles Rennie Mackintosh’s Hill House against stencilled walls, showing what a standalone piece of design the Hill House chair really is. Ludwig Mies van der Rohe was a rising figure of the modernist movement so it’s not surprising that his iconic Barcelona chair, one of the most recognised objects of the last century, was granted a central spot in the American Psycho apartment. Smack bang in the middle of Bateman’s living room is the Alanda coffee table, designed by Paolo
Piva for B&B Italia, a true statement to 80s sophistication
and style.

The apartment walls reveal an impressive art collection that was a particular focal point for production designer Gideon Ponte, who had worked in New York art galleries during the period the film was set. The drawings either side of Bateman’s music system were from American painter and sculptor Robert Longo’s fascinating ‘Men in the Cities’ series, which depict sharply dressed corporates writhing in contorted emotion, again a subtle reference to the unhinged character’s mental state.

The quality of design is enhanced by lots of empty spaces, sparingly punctuated by colourless furniture in stark black and white, a theme that purposely runs through the apartment. Nothing in the apartment really screams comfort, from the furniture to the stainless-steel kitchen with its sharp corners and grating angles.

The films satire rests heavily on materialism and superficiality, in true essence this is the ultimate
bachelor pad, however cold and calculating it is equally stylish and enviable. It’s interiors like this, brimming with iconic furniture, that stick in our memories well after the credits roll.