In the last issue we uncovered the story of the de Voogd family’s journey in the East, through Ambassador Nicholaas Arie de Voogd’s various consular and ambassadorial missions on behalf of the Dutch government.  Of particular interest was his posting as Consul in Nanjing from 1948 through to 1950, and as Ambassador to the People’s Republic of China in Beijing from 1950 to 1951, a period when high quality art objects were available in the market to collectors with a good eye, situated at the right place and the right time.

In this issue, let us examine a handful of wonderful objects collected in Nanjing and Beijing during this period. 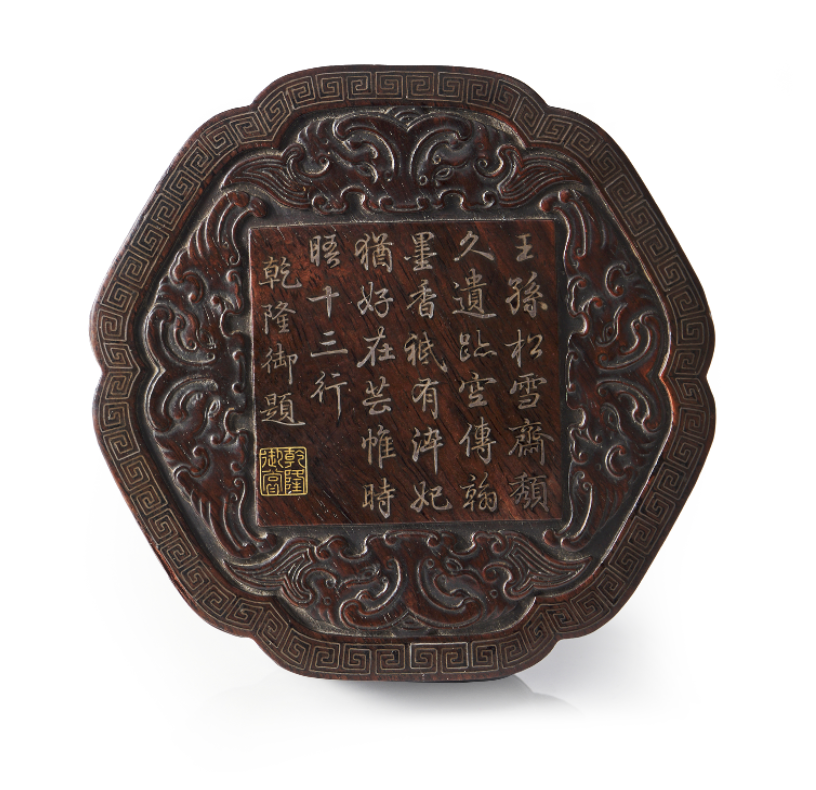 This distinguished box was crafted in the Muzuo (wood workshop) in the Zaobanchu (Imperial Palace workshops) in the Forbidden City in Beijing, and exhibits the pinnacle of quality of low relief carving of the Qianlong Period (1735-1796). It was created by order of the Qianlong Emperor, and inscribed with a poem written by the Emperor himself, and originally contained a precious inkstone made of jade, duan or songhua stone.

The box is made of zitan, one of the rarest timbers and highly prized in the Imperial Palace, known for its deep lustrous purple-brown colour and tight grain, and its ability to receive the most delicate carving. The box is of lobed hexagonal form when viewed from above, referencing Song Dynasty ceramic, lacquer and precious metal forms which in turn were based on flowers like the mallow. It is decorated with archaistic taotie masks surrounding a square reserve inlaid with painstakingly crafted silver wire calligraphy, the lines running from thick to thin as if written by a brush in ink.  The sides of the lid are further relief carved with archaistic clouds and taotie masks in the manner of the finest jade carving. The decorations referencing archaic bronzes and jades and Song forms reflect Qianlong’s love of antiques.

The interior of the lid is finished in thick black lacquer with the Taoist trigram Qian carved in intaglio into the centre and gilded. Qian is the northern trigram of the Bagua (the eight trigrams), represents heaven and leadership, and is the first character in Qianlong’s name. Thus, it is found inscribed in various personal objects used by Qianlong, and in addition to the poetic inscription, signifies that this object had a very personal connection. 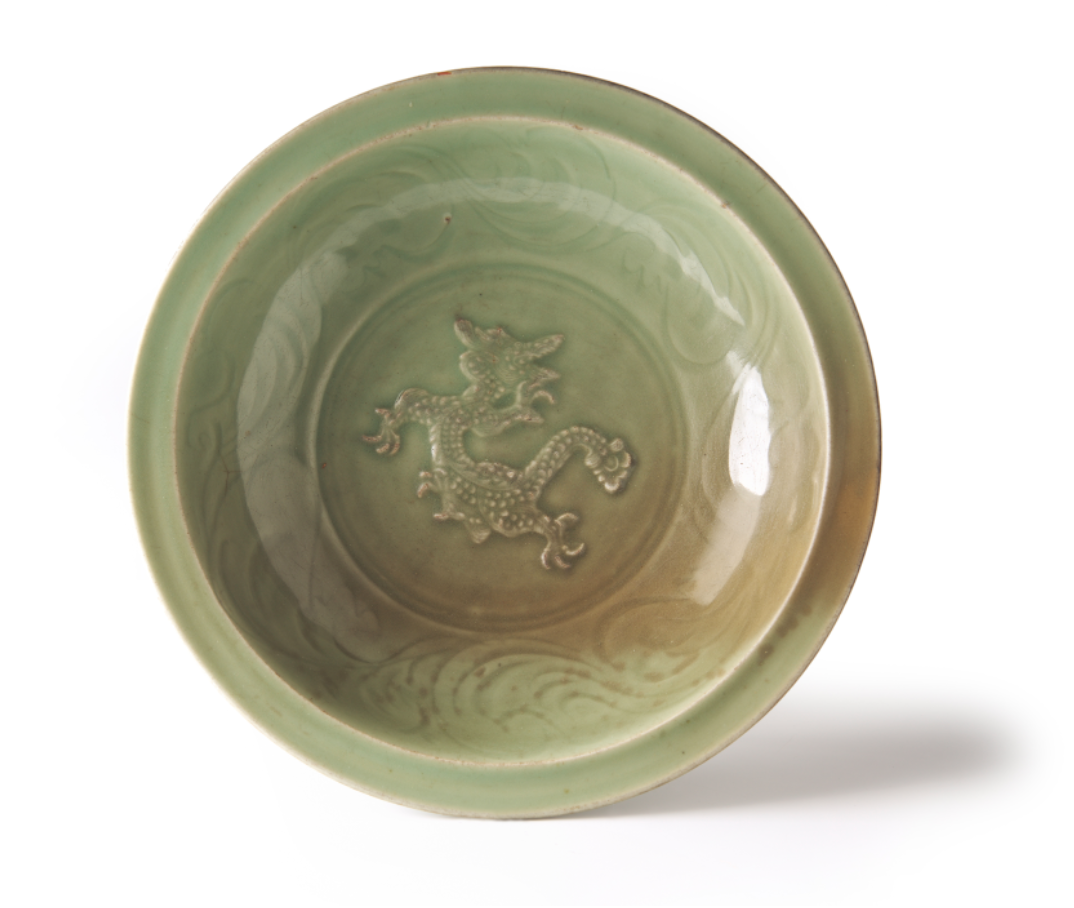 The Longquan kilns in China’s Zhejiang province were known for their celadons since the Northern Song Dynasty, but the most famous wares were created in the Southern Song and Yuan Dynasties.

This bowl is a good example from the Yuan Dynasty. It is made of high fired stoneware, with powerful carved scrolling foliage to the cavetto, and a sprig moulded writhing four-clawed dragon to the centre, the high points forcing the celadon glaze to pull back during the firing and pool around the dragon, exaggerating the three-dimensionality to give a heightened graphic power to the image.  These bowls have been found in small numbers in Southeast Asia, Japan and Turkey (and can be seen in the Topkapi Museum collection), indicating that in addition to noble use in China, they were a rare, high-level export product of the Longquan kilns during the Yuan Dynasty. 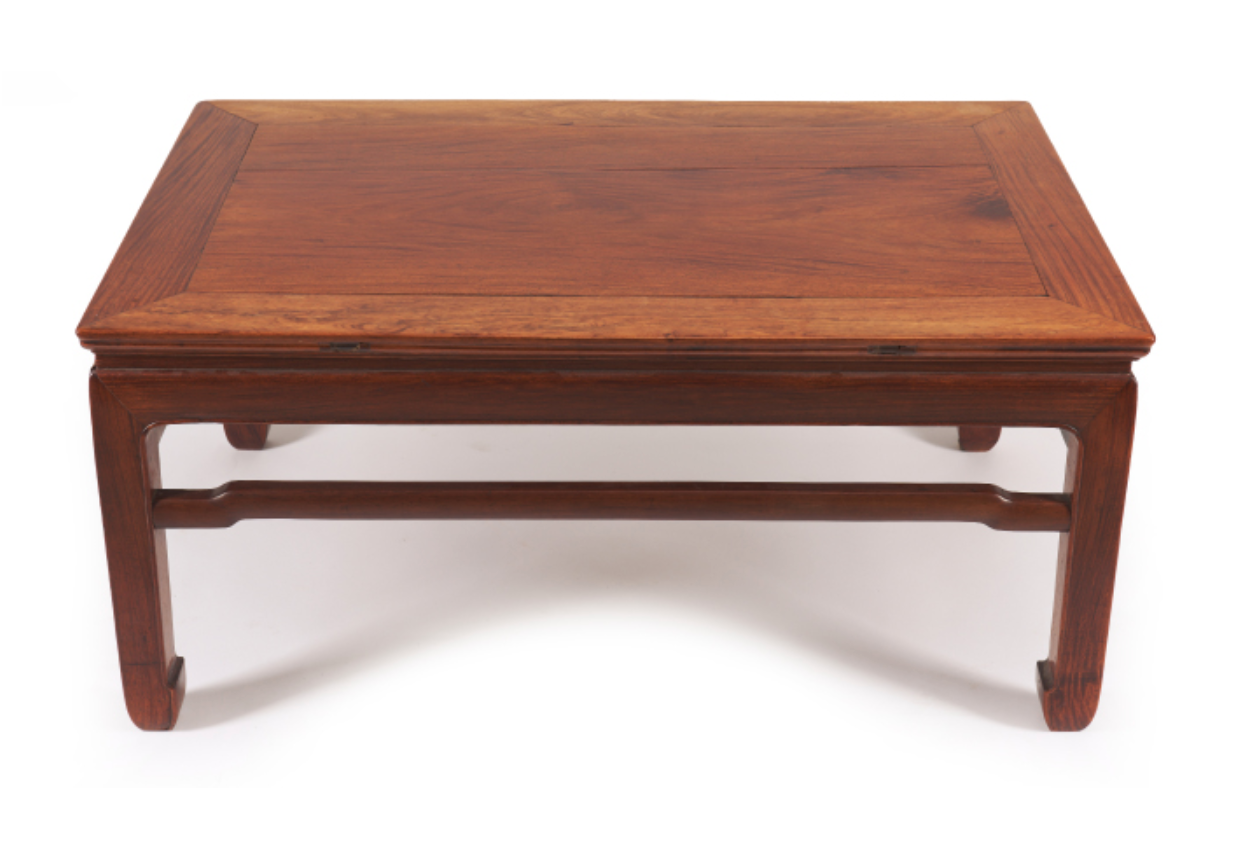 Zitan wood was favoured by the Imperial palace, but huanghuali (yellow flowering pear) wood was the favourite of the literati.  Famous for its deep honey colour and exceptional watery figuring of the grain, during the Ming and Qing Dynasties it was crafted into simple architectural forms which exhibited the colour and grain to their best.

This ‘kang table’, was made for use on the kang (a heated platform popular in northern China, where a scholar might work, eat, have meetings with friends or relax during the colder months).

It is waisted under the top surface, with subtly flaring legs terminating in hoof feet, the legs joined by humpback stretchers, with a fine beaded line along the inner edge of the legs, continuing along the underside of the apron, with a grain figured like flowing water to the top panel, including some characteristic ‘ghost face’ knots, a sought after feature of huanghuali. 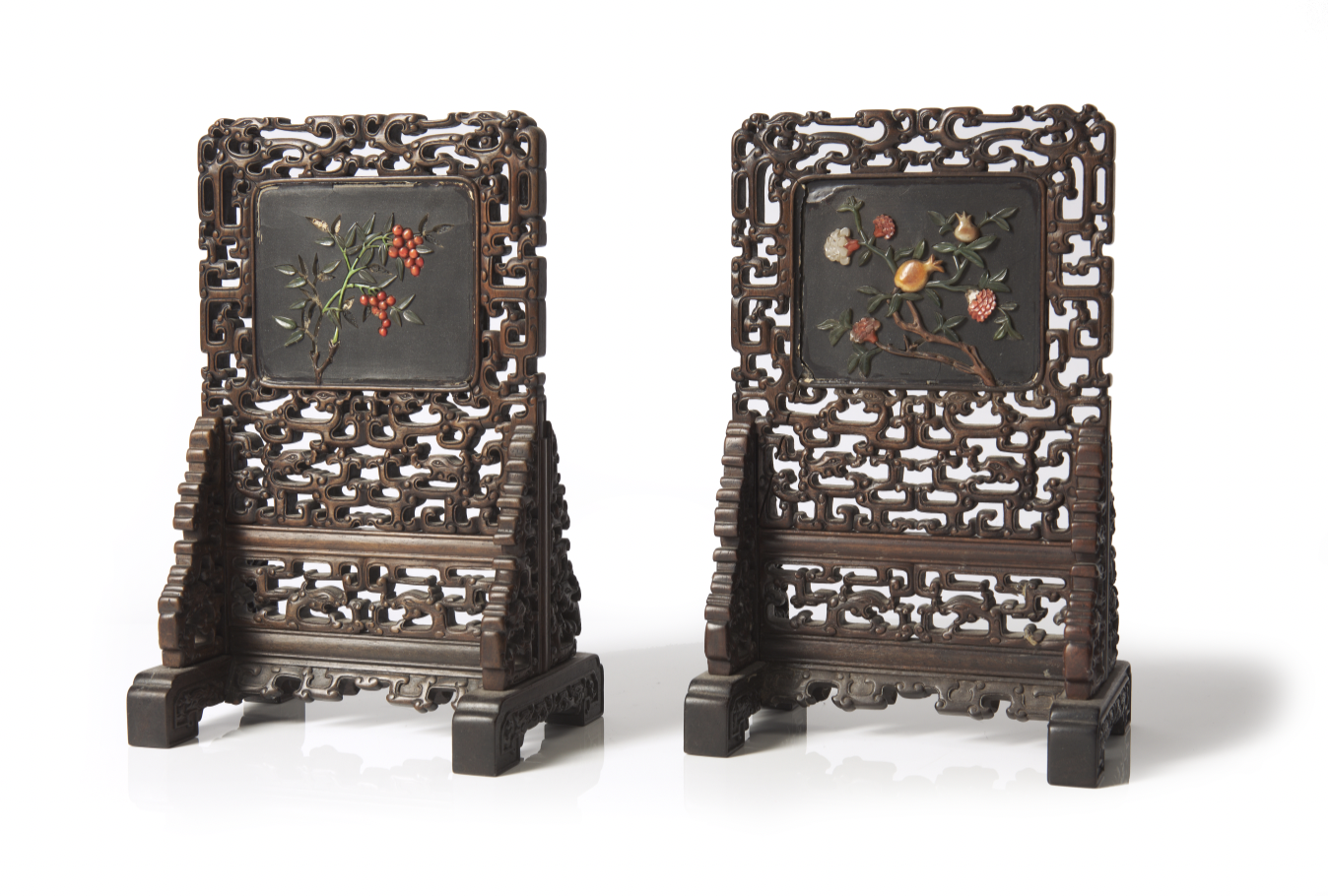 The technique of inlaying hardstones into lacquer and wood had already been in existence in China for many centuries, but came to prominence both in fashion and in the refinement of technique during the Qianlong Period (1735-1796).

The focus of this sumptuous pair of small table screens are the two black lacquer panels inset with relief carved hardstones, one depicting a flowering and fruiting pomegranate branch in spinach and brown jade and coral, the other naturalistically depicting a fruiting heavenly bamboo (nandina) branch in spinach jade and coral. The panels are surrounded by pierced hardwood fretwork depicting archaistic scrolling qilong.  In Chinese culture pomegranate symbolises progeny, and heavenly bamboo (tianzhu) is symbolic for expressing a wish as zhu pronounced the same way (but with different characters) means both bamboo and wish. So together they represent a wish for many children.