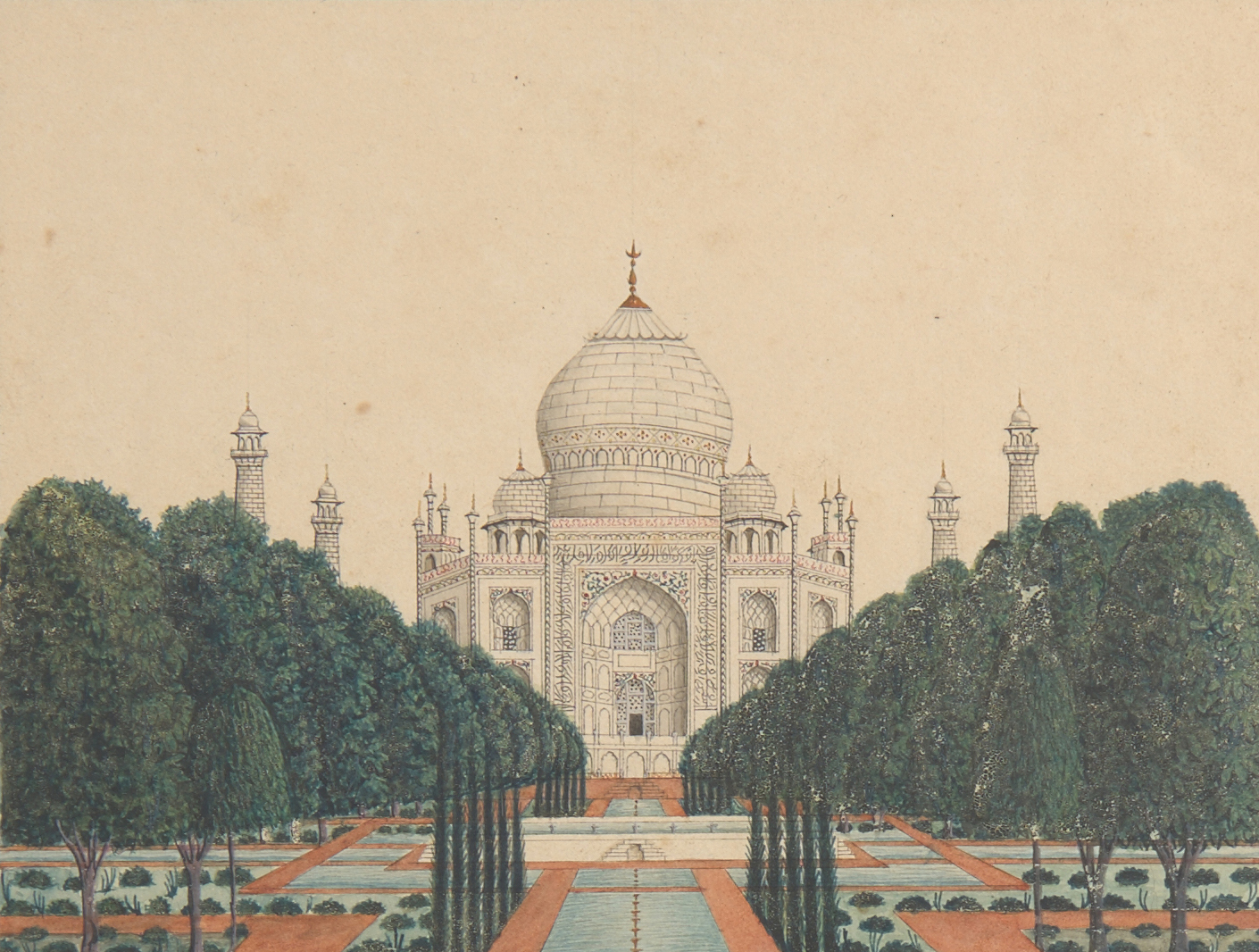 NINETEEN INDIAN COMPANY SCHOOL ARCHITECTURAL PAINTINGS AND PIETRA DURA STUDIES
19TH CENTURY
$10,000-15,000
After the dissolution of the Mughal Empire, artists who had previously been attached to ateliers in the Mughal courts needed work, and with the large influx into India of English officers of the British East India Company, they quickly adapted to the requirements of this new clientele, particularly reflecting European ‘Enlightenment’ tastes for animal and plant natural studies, and topographical and architectural studies.  Colloquially known as the ‘Company School’ or ‘Patna School’, this type of painting flourished in the 18th and 19th Centuries.

We are proud to offer this group of Company School studies of Northern Indian Mughal monuments and pietra dura panels, many with 1820s and 1830s English watermarks, including multiple views of the building often referred to as the greatest example of Mughal architecture and one of the cultural treasures of the world, the Taj Mahal. 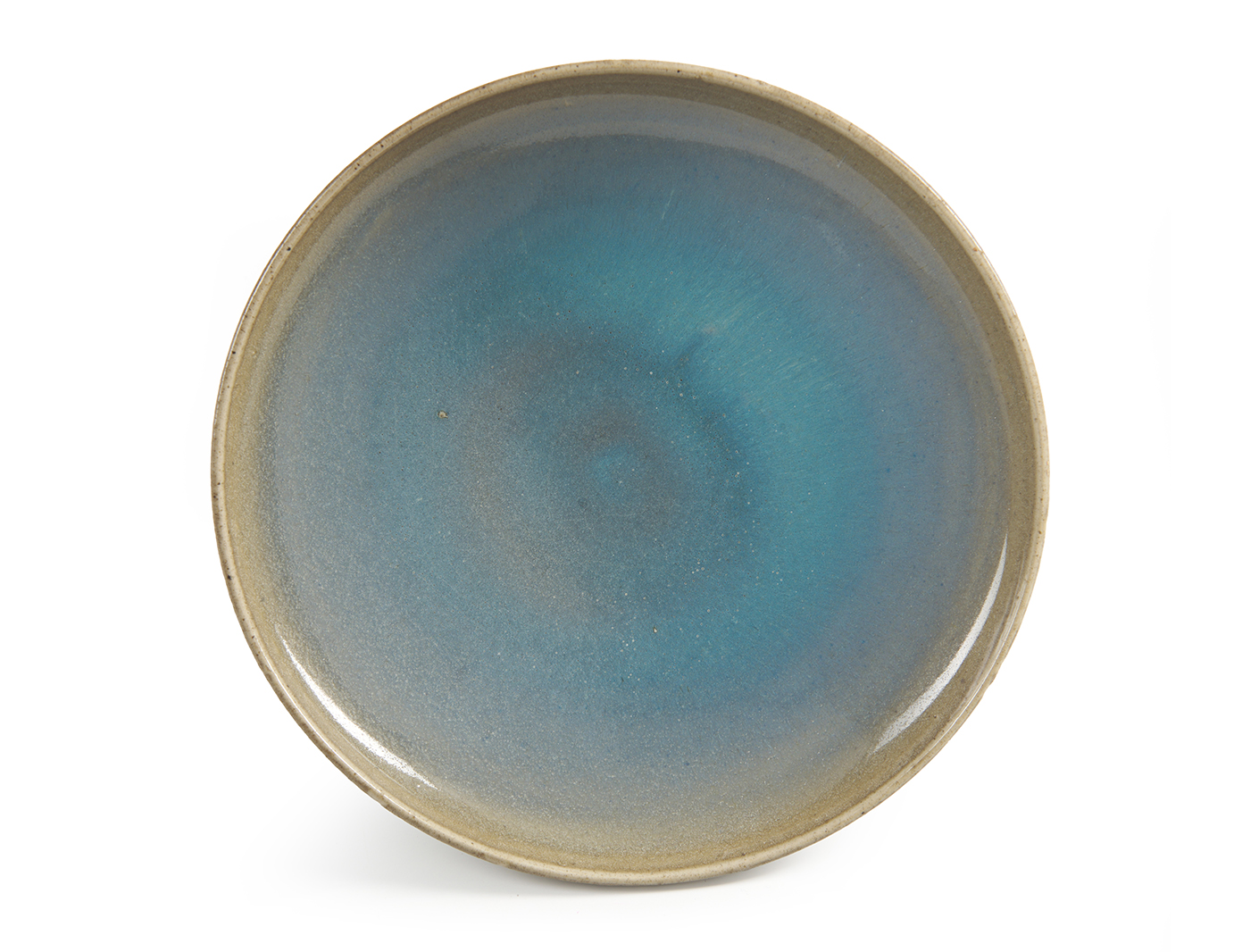 A CHINESE JUNYAO DISH
SONG DYNASTY (960-1279)
4cm high, 19cm diameter
$1500-2500
The Jun kilns were known in ancient times as one of the five great kilns of the Song Dynasty, alongside Ru, Guan, Ding and Ge. Jun is known for its elegant and austere, unornamented forms. It is most famous for its beautiful sky-blue opaque glaze which comes from iron oxide in the thick glaze, which is fired in a reduction kiln (reduced oxygen). This treatment scatters the blue light when it hits the glaze, reflecting the light so as to appear opalescent blue in the viewer’s eyes. Occasionally the glaze is then splashed with copper red to produce abstract cloud-like effects.

The bowl illustrated here demonstrates the blue glaze well, thinning to a pale olive hue at the rim. 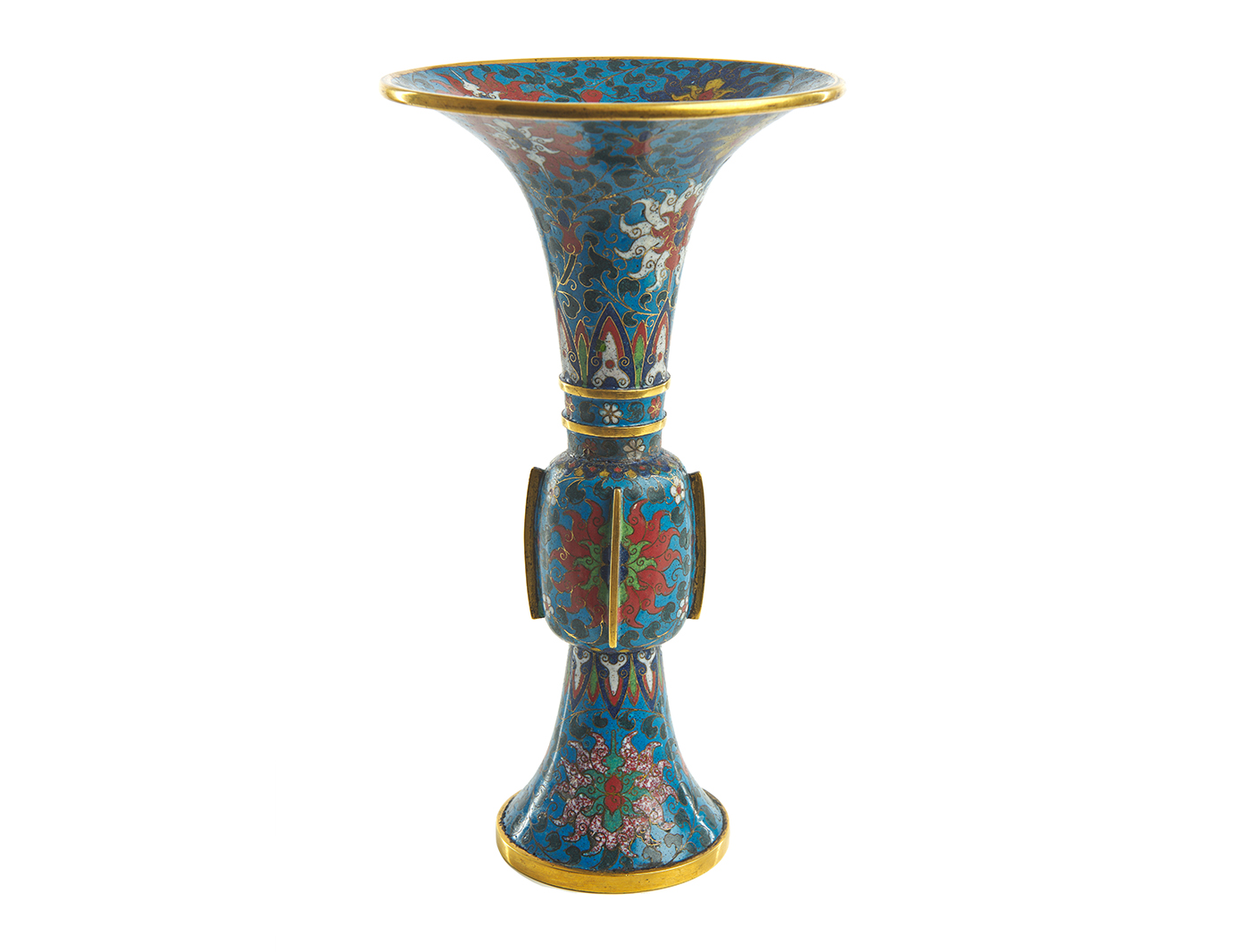 A CHINESE CLOISONNE GU-FORM VASE
LATE MING TO EARLY QING DYNASTY, FIRST HALF 17TH CENTURY
32cm high, 18cm diameter
$5000-7000
The technique of applying metal wires to a metal base to form partitions, filling the partitions with crushed enamel and then firing in a muffle kiln to melt the enamel, is called cloisonné. This technique appeared in the Mediterranean region thousands of years ago, but came to extraordinary heights of perfection in Byzantium in the 12th Century. Soon after, the technique reached China in the Yuan Dynasty (1279-1368), with virtually the same colour palette as that perfected in Byzantium. Initially with seven colours (blue, turquoise, green, red, white, yellow and purple), this expanded with the use of mixed or speckled colours during the Ming Dynasty, and then finally more colours emerged later during the Qing Dynasty, with new colours (known in China as yangcai and falangcai) arriving in China from Europe through the Jesuit mission to the Kangxi Emperor’s court, the most famous example being the rose colour based on colloidal gold.

The vase in this auction is in gu form, based on a type of ritual bronze wine vessel of the Shang Dynasty (1600-1046BC) called a gu. The gu is one of the most sublime forms in the history of Chinese forms, and has been replicated in different materials like jade and ceramic from the Song Dynasty to modern times. This vase has a copper base, decorated in cloisonné with scrolling vines and lotus blossoms, with the exposed copper including the vertical blades around the central ovoid section gilded. 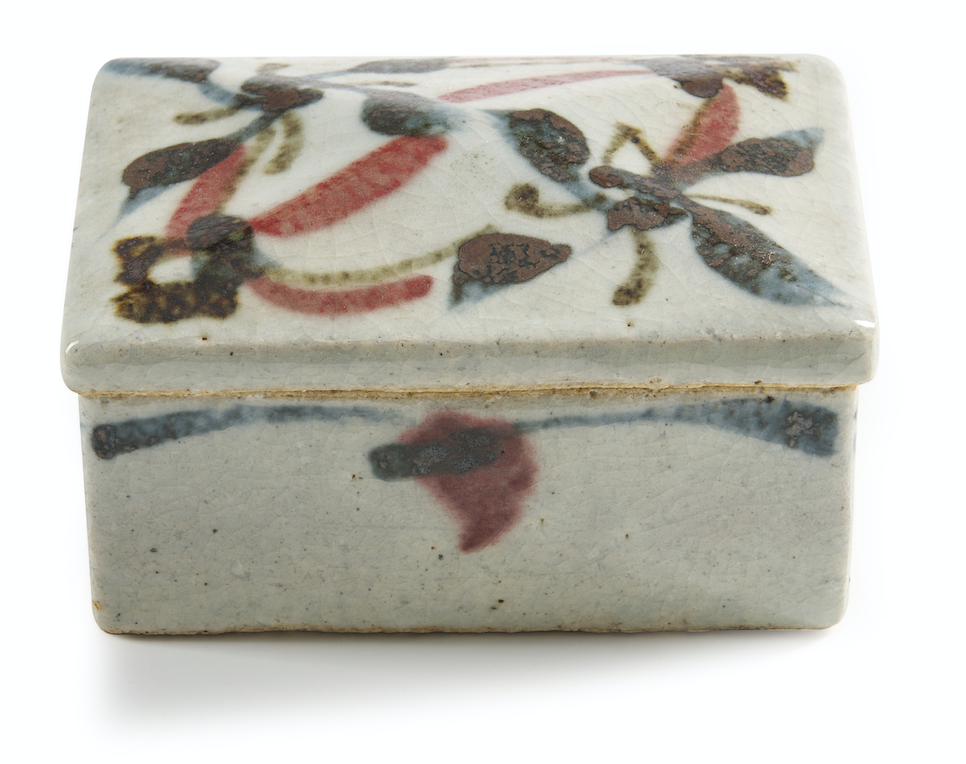 EXHIBITIONS:
Exhibited at Newcastle Art Gallery
$1,000-2,000
The Mingei art movement of the 20th Century was born from the philosophies of art critic Yanagi Soetsu, who proposed that there was a beauty in utilitarian hand-crafted objects made by unknown craftsmen for ordinary people. Under the philosophical direction of Soetsu, two of the greatest Japanese potters of the 20th Century, Shoji Hamada and Kawai Kanjiro made their mark on the history of ceramics with their trademark humble, unsigned pots, utilising abstracted iron and other ancient glazes on hand-formed and hand-thrown stoneware vessels, all strictly utilitarian wares.

This stoneware box is by Kawai Kanjiro, and is a typical example of his most iconic work, being stoneware with abstracted piped slip decoration finished with coloured glazes, unsigned, but as Kanjiro famously said, “my work itself is my best signature”. 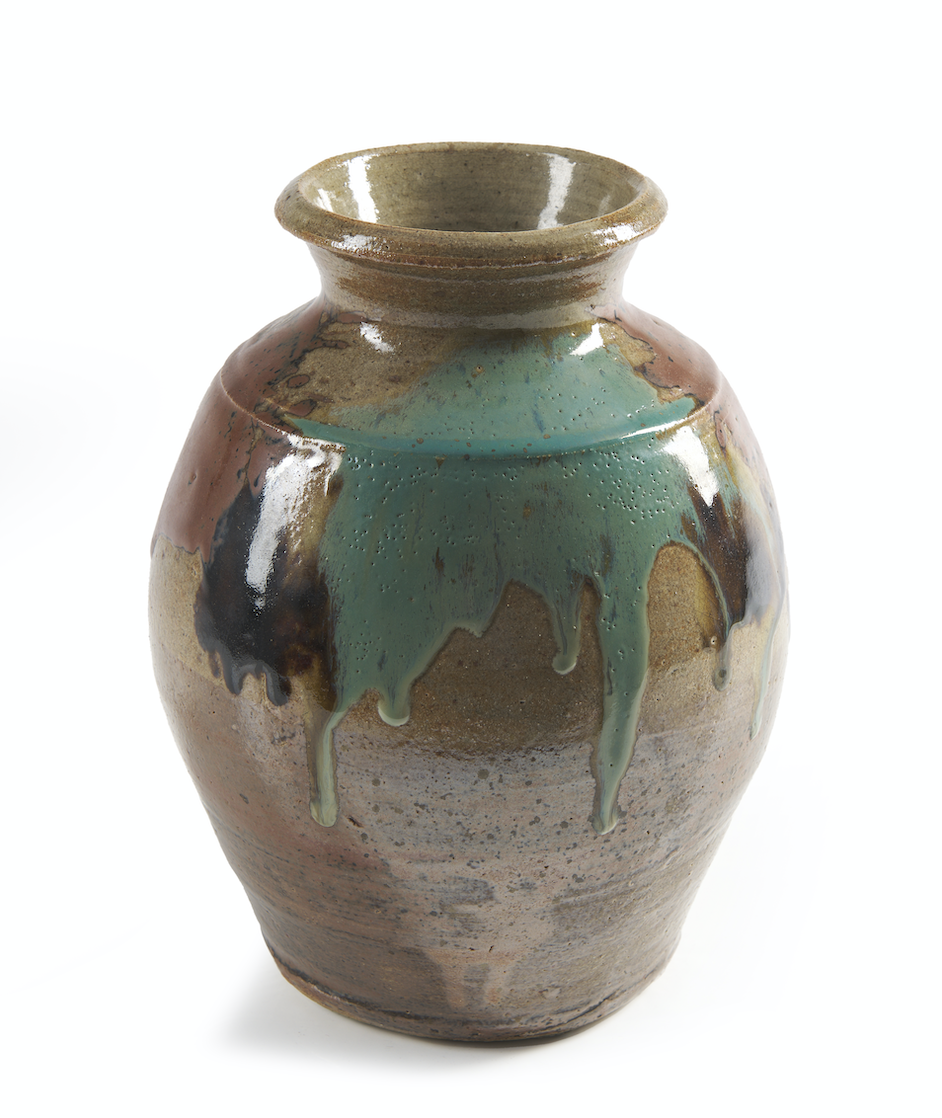 A JAPANESE MASHIKO MINGEI TSUBO BY SAKUMA TOTARO (1900-1976)
SHOWA PERIOD, CIRCA 1950S-1960S
26cm high, 20cm diameter
$1,000-1,500
Another great proponent of the Mingei Movement, and from Mashiko (the town Shoji Hamada and English ceramicist Bernard Leach made so famous) was Sakuma Totaro.  Totaro was the master of a kiln in Mashiko having made cooking pots and other lowly wares for generations.  When Hamada moved to Mashiko in 1924, he quickly befriended Totaro, managing to convince him to try potting bowls and vases with more interesting glazes. Totaro became known for epitomising the ideals of Mingei with his subtle and reserved work, in some opinions even more so that Hamada.

The current tsubo (a jar or vase with a wide mouth), is an exemplary work by Totaro, with a generous and ancient rounded form finished with broad splashes of Mingei signature kakiyu (persimmon glaze) and green, giving a fresh Spring time feeling.

When Soetsu’s book ‘The Unknown Craftsman’ was finally released as an English translation in 1972 it literally revolutionised studio pottery around the world overnight, spurring on thousands of studio potters around the world (including Australia) to work under the style and ideals of the Mingei potters of Mashiko. 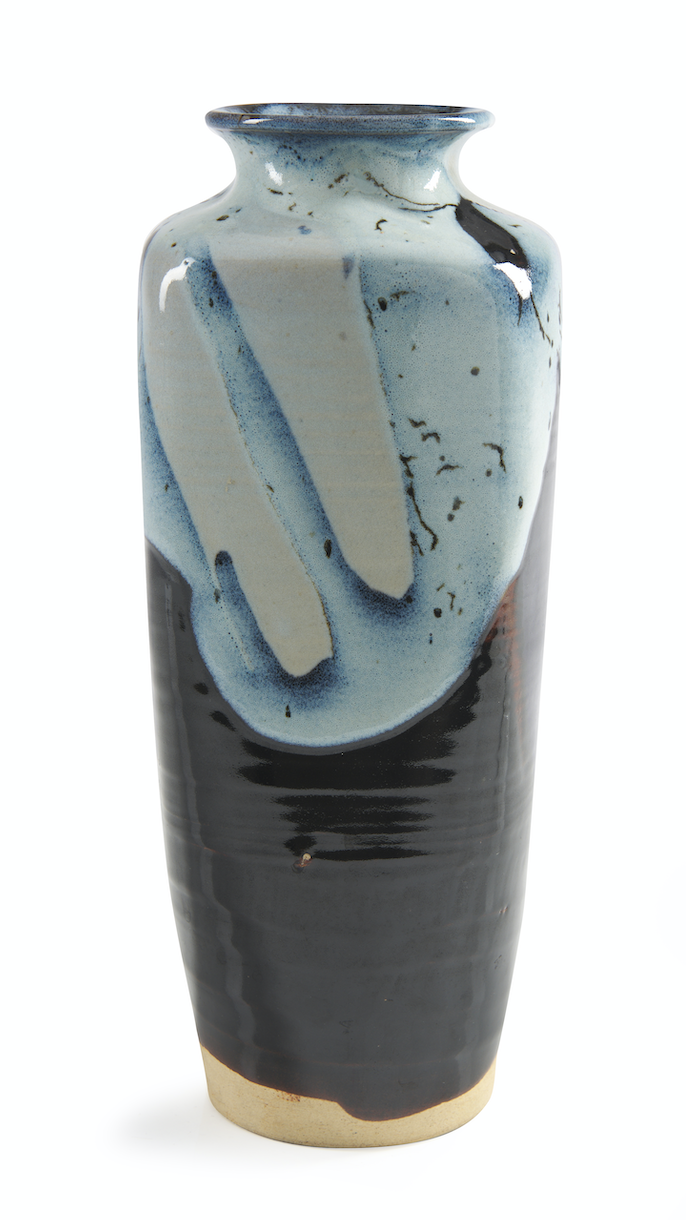 A JAPANESE KYOYAKI STUDIO CERAMIC VASE BY KIYOMIZU ROKUBEI V (1875-1959)
SHOWA PERIOD (1926-1989)
30cm high, 14cm diameter
$500-700
Fifth in a lineage of important Kyoto potters stretching back to the 18th Century, Rokubei V was an exceptionally versatile potter and studio work-master fluent in all of the styles from Japan, China and Korea, in stoneware and porcelain, and also painting, having been apprenticed to great Meiji period masters Kono Bairei and Takeuchi Seiho. Also, he was one of the great modernist potters of Japan, creating ground-breaking work for international exhibitions, even being awarded a medal by the President of France in 1931.  One year earlier he was inducted into the Imperial Art Academy, becoming an official potter to the Imperial Household.

This vase references the black glazed, phosphatic-splashed Lushan wares of Tang Dynasty China, but with a modernist faceted baluster-form, and a dynamic diagonal splashing to the glaze.