Our October Decorative Arts Auction will feature a handwritten letter autographed by the Vice-Admiral Horatio Nelson, 1st Viscount Nelson, 1st Duke of Bronté, also known simply as Admiral Nelson (1758-1805). He is regarded the greatest ever British naval hero for his services to Britain during the Napoleonic Wars.

The letter was allegedly discovered in an old trunk acquired at a Burnhams property in the English county of Norfolk. It bears the Britannia watermark and is autographed ‘Nelson & Bronte’ in reference to Admiral Nelson’s status as the first Duke of Bronte. It is written with the Admiral’s distinctive left hand (having lost his right arm in battle in July 1797). It also conveys his strong character and charm that has distinguished so many of his letters.

In his letter Admiral Nelson quite simply expresses gratitude at receiving an unexpected gift from a distant relative. Written in graphite and headed ‘Merton March 7th 1803’ to recipient Matthew Nelson Esq, the letter reads:

A Turkey and two hares are received at Merton and from the name of Math. W Nelson being upon one of the directions I leave to return you my sincere thanks for them.

Although I know from my mother that we are relations yet I do not think that I ever had the pleasure of meeting you but should you come to London I shall hope for the satisfaction of being known to you. I beg my best wishes to your family and I assure you Dear Sir that I feel myself your much obliged Relation 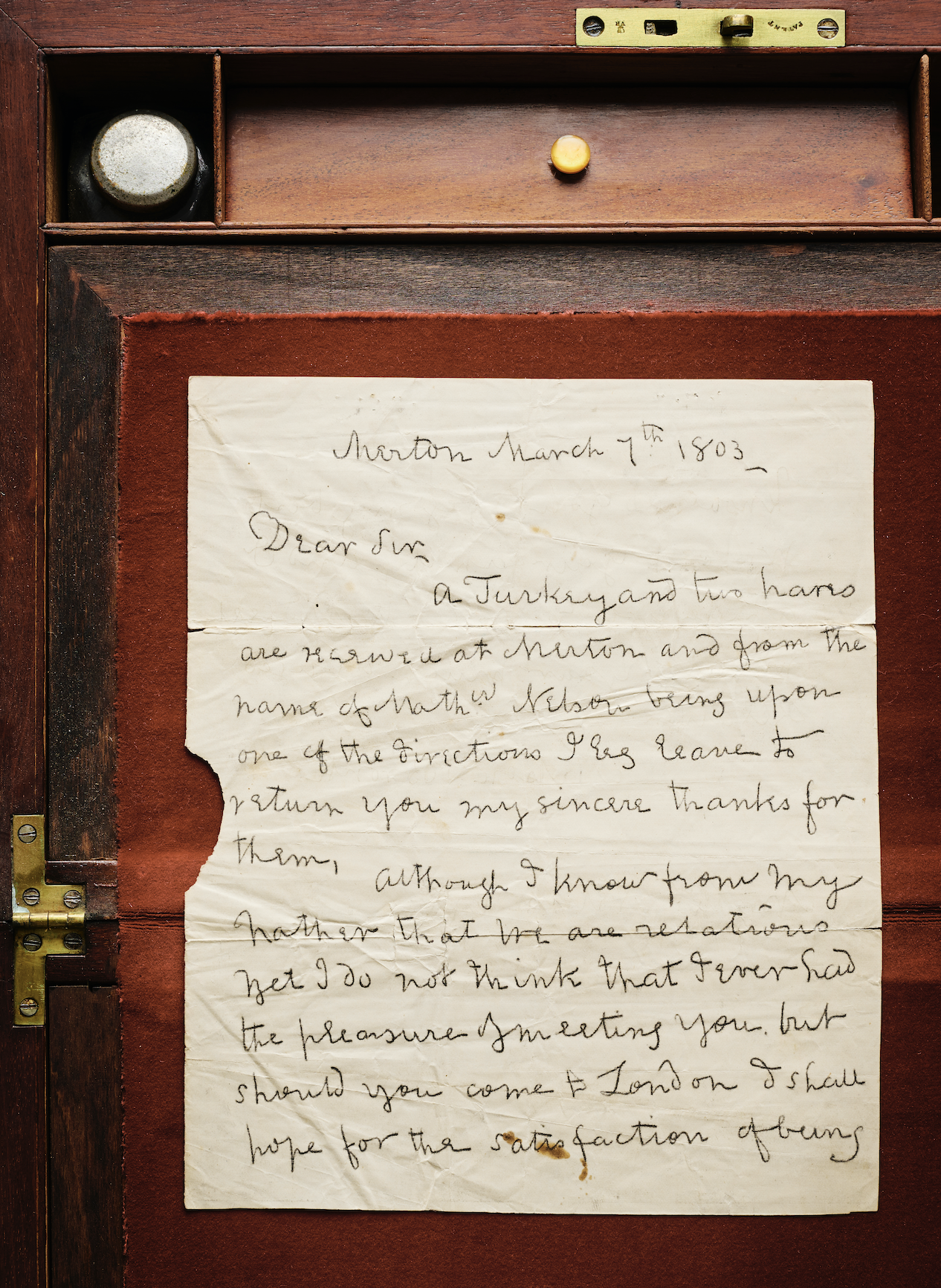 As the letter suggests, it was written at Admiral Nelson’s beloved English country homestead, Merton Place, worlds away from the turbulent bloody seas of naval warfare. Merton Place was purchased by the Admiral in 1801 seeking an idyllic country homestead where he could rest and enjoy time with friends and family between plotting against his arch enemy Napoleon Bonaparte.

Amid the tranquil setting of Merton Place there also transpired a ménage à trois scandal. Admiral Nelson (now estranged from his wife) had for several years continued an affair with the famous and alluring Lady Emma Hamilton, wife to Sir William Hamilton, British Envoy to the Naples and dear friend to the Admiral. It is said Sir William Hamilton was either unperturbed or just ignorant of the affair. The three resided at Merton Place referring to their happy household as tria juncta in uno or ‘three joined in one’. Further to this the Admiral and Emma Hamilton had a daughter Horatia Nelson, who was born in secret on the 29th of January 1801. This all took place under the oppressive social conventions of Regency England. You only need refer to a Jane Austen novel to imagine the whirlwind of fascination and gossip generated by this controversial arrangement. 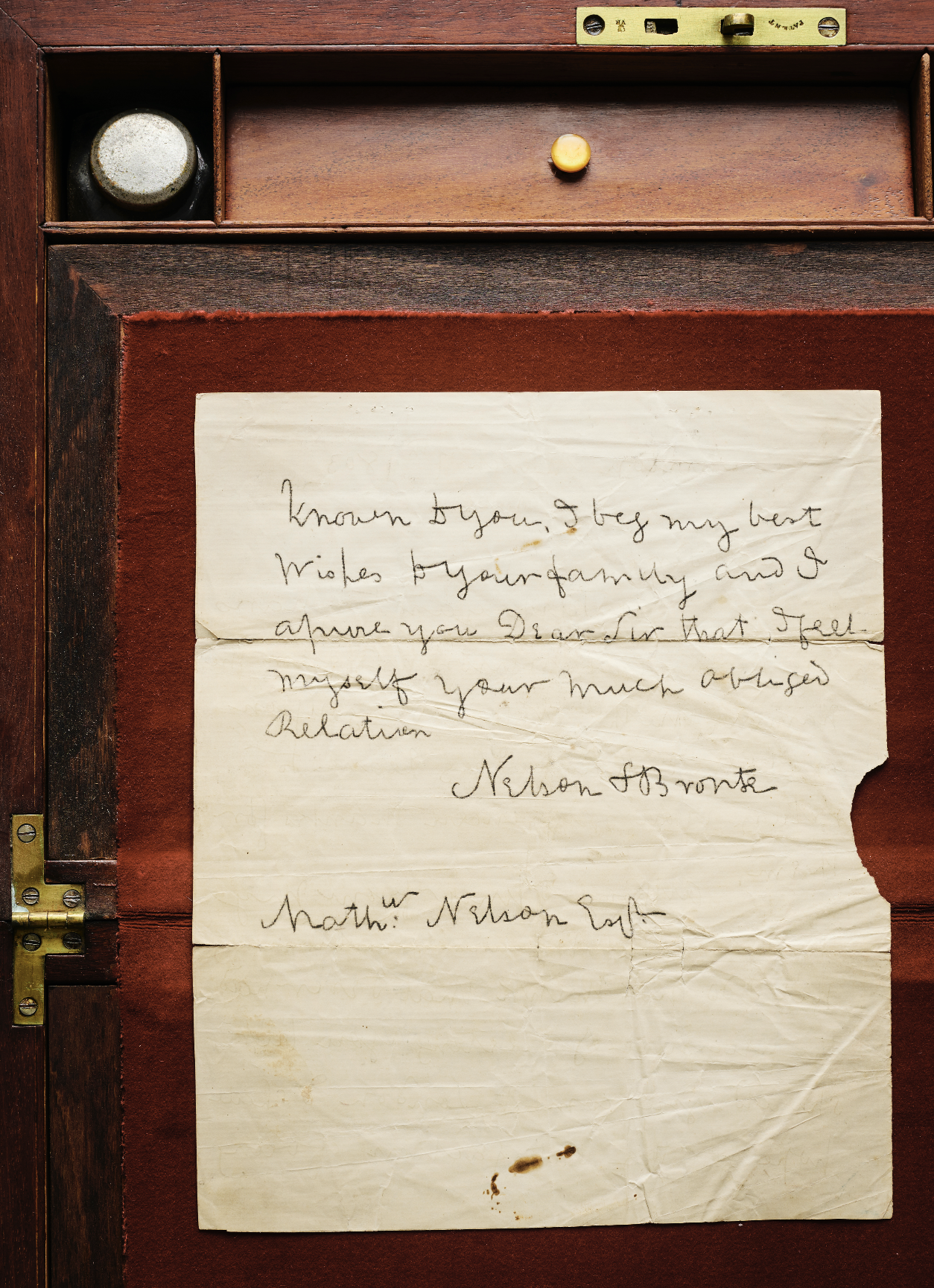 While this letter may not contain the Admiral’s gripping wartime naval correspondence or his scandalous pledges of love and devotion to Emma Hamilton, it does convey a sincere moment of gratitude from a towering wartime naval hero seeking respite from the monumental pressures of the Napoleonic war. Admiral Nelson did not have the pleasure of realizing his dream of retiring at Merton Place with his lover and daughter (Sir William Hamilton having died shortly after this letter was written). Two years later the Admiral also died after being shot just before seizing victory at the famous Battle of Trafalgar.